Why Do Cats Scratch? 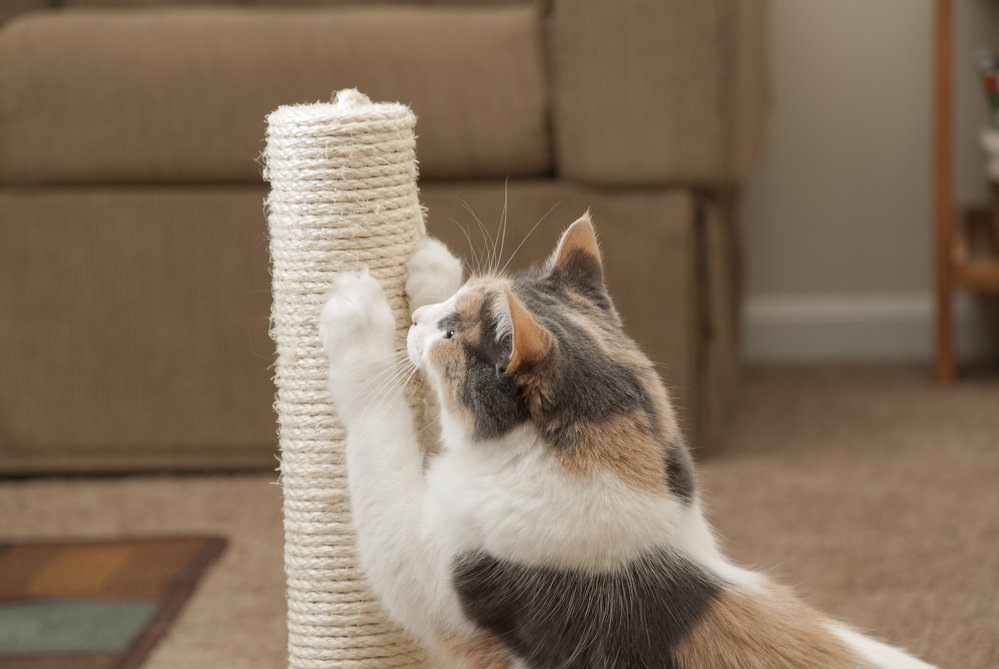 Scratching is a behavior that pet owners may consider undesirable in cats. However, it’s not only perfectly natural behavior for cats, it’s also a very instinctual behavior. Cats scratch for their entire lives, not just during kittenhood. Therefore, it’s important for pet owners to know why their cat scratches and how to handle it.

Why Does a Cat Scratch?

Cats don’t scratch out of malice or a need to destroy the furniture. They scratch because it’s a primal instinct that has several possible causes.

Scratching can remove part of the nails’ outer shell, which reveals the fresher nail underneath. This means that scratching is actually a part of a cat’s regular grooming ritual.

They may also scratch to mark territory. Scratch marks are visible to other cats and are a sign that the territory belongs to the cat that made them.

Scratching also helps cats stay healthy. The act of scratching stretches out muscles, tendons, and joints throughout the cat’s body. Scratching regularly can help a cat to avoid injury.

Cats also scratch when they’re excited. If they see or experience something that excites them, cats can expend some of the excess energy by scratching.

How to Stop Undesirable and Destructive Scratching

Undesirable and destructive scratching is a problem for many cat owners. For others, it’s a barrier to owning a cat in the first place. Fortunately, there are steps you can take to stop your cat from scratching in a destructive way.

The best way to deter your cat from scratching the furniture is to provide them with something better to scratch. Cats don’t scratch furniture out of an innate desire to destroy a sofa. They scratch because it feels good to them and fulfills a biological need. A scratching post conveniently located near furniture that the cat liked to scratch can help to redirect the scratching to a more appropriate place.

One of the reasons a cat scratches is to groom their nails. If you keep your cat’s nails trimmed, they may feel less of a need to scratch. Plus, if they do scratch, with trimmed nails the scratching may be less damaging.

The more appropriate scratching options your cat has, the better. Cats sometimes prefer to scratch in particular locations because it’s also a territory-marking behavior. Place scratching posts near places your cat likes to frequent. If you see your cat scratching furniture or another inappropriate item, place a scratching post near it as a better option.

The best way to train your cat to scratch more acceptable objects, such as a scratching post, is to reward the behavior you want to see. If you see your cat put its paws on a scratching post, reward them with a treat. The cat will begin to associate scratching the posts with rewards and will therefore be more likely to continue that behavior.

Most cat owners will be familiar with scratching behavior, but that doesn’t mean they don’t have questions about managing this undesirable action. Here are answers to the most commonly asked questions about cat scratching.

Why Does a Cat Scratch Furniture?

Feral cats scratch logs and trees outside. This is because they’re both sturdy and markable. This means that any marks made by the cat’s claws are visible to other cats. In a house, the furniture has similar characteristics. It’s the sturdiest available surface on which the scratch marks will show.

Can You Stop a Cat from Scratching?

Scratching is a primal behavior. A cat won’t be considering whether or not to scratch. Instead, the cat will be wondering where to scratch. While you can’t stop your cat from scratching entirely, you can direct the scratching away from your furniture. To do this, you’ll need to get scratching posts or other appropriate scratching alternatives.

How Do You Get Your Cat to Scratch a Scratching Post?

Check out our blog for monthly informational posts.